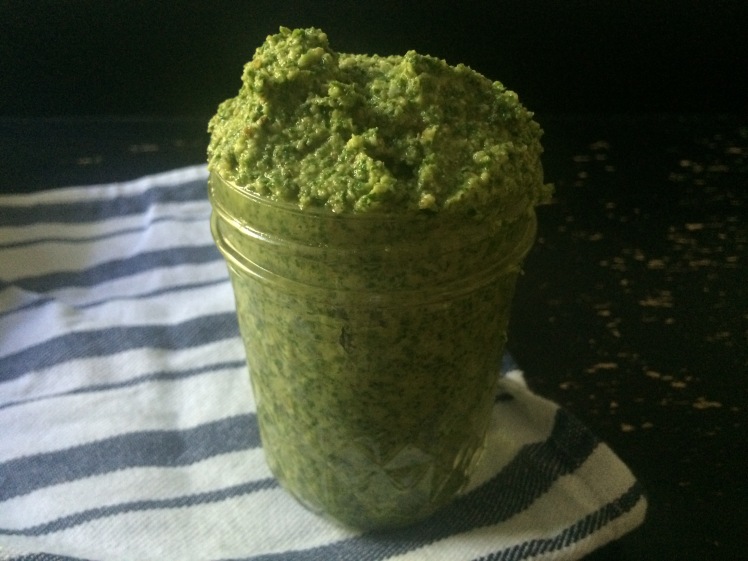 As a child, I was frequently turned loose in the yard when I said I was hungry, with the expectation that I’d find something to eat in the garden. I usually did. Buuuut… I’ve always been an adventurous eater. This led to chowing down on some questionable things, such as Queen Anne’s lace (perfectly safe and a relative of carrots) and regular old grass (good for cows, not so much for humans). I do think I even popped a dandelion head in my mouth once or twice. Not so good raw, in my opinion.

I don’t recall where I first saw that you can “officially” eat dandelions. It must have been on Pinterest somewhere. Pinterest is such a vast reserve of knowledge, if you dig deep and do your homework. But yes, it’s true! Every single bit of the dandelion plant is edible, from the roots to the flowers. The leaves are comparable in nutrition to other leafy greens such as kale and, better yet, they are available for free in most yards across the country. Dandelions taste a little like arugula, and the smaller, younger greens are the most tender and delicate in flavor.

The ones I found were a little older, but still good. I discovered this bounty of dandelions when out volunteering with Trees Atlanta pulling weeds near some saplings. Getting right to work, I grabbed on a leafy patch the size of my head. Pop, up came the whole plant, root and all, and I realized the area was absolutely full of them. I instructed my fellow volunteers to put any dandelions they didn’t want in a pile for me and, by the end of the day, I walked out with probably two pounds of free greens!

I picked my dandelions in a buffer zone between a new housing development and an intown highway. WARNING: Don’t ever pick dandelions for consumption near roads or where pesticides have been sprayed. The ones I found were far away from the road and were in a patch of land owned by a conservation society. I was confident they had not been sprayed or otherwise tampered with. I also washed them three times in water and vinegar. However, if you are in any way worried about the integrity of the dandelions, do not pick and eat them! Wait until some sprout in your yard and then go to town.

I focused on the greens for this recipe because I was the most confident cooking them. I was a little wary using the leaves raw, because they had been out in a field their whole lives, so I blanched them a bit before making this pesto. This also helps to break down the cell walls so the greens are easier to puree into a smooth consistency. Next time I’ll branch out and use the roots too. Now get out there and eat your weeds!

Fill a medium bowl with cold water and three cups of ice cubes. In a medium pan, bring 2 cups of water to a boil. Completely submerge dandelion greens in the boiling water. Bring back to a boil and cook for 3 to 5 minutes. Drain the greens and submerge them in the ice water for 2-3 minutes until cool. Remove from the water and wrap in a dish towel, squeezing out as much water as possible.

Place the blanched greens in the bowl of a food processor*. Add in the pecans, Pecorino Romano, garlic, lemon juice, and salt and pepper. Pulse a few times to combine. Then turn on the blender and add the olive oil in a steady stream until the pesto reaches the desired consistency**.

* You can use a stick blender in a pinch, just work in batches.
** I like my pesto a little chunky, so I probably used about ¾ to 1 cup of oil.

You can use this pesto anywhere you’d use a basil-based version. The greens I picked were on the old side, so my pesto turned out with a bit of a bitter aftertaste. In thinking of ways to combat this bitterness, I came up with a natural solution: sweet corn!

I simply pan-seared two ears of sweet corn in my cast-iron skillet over high heat, then put the lid on and steamed them in a cup of water for about 15 minutes. I removed the corn and drained the pan, then blistered a few cherry tomatoes. I plopped a big scoop of pesto atop the corn and sprinkled a little more pecorino on everything for a perfect spring lunch. 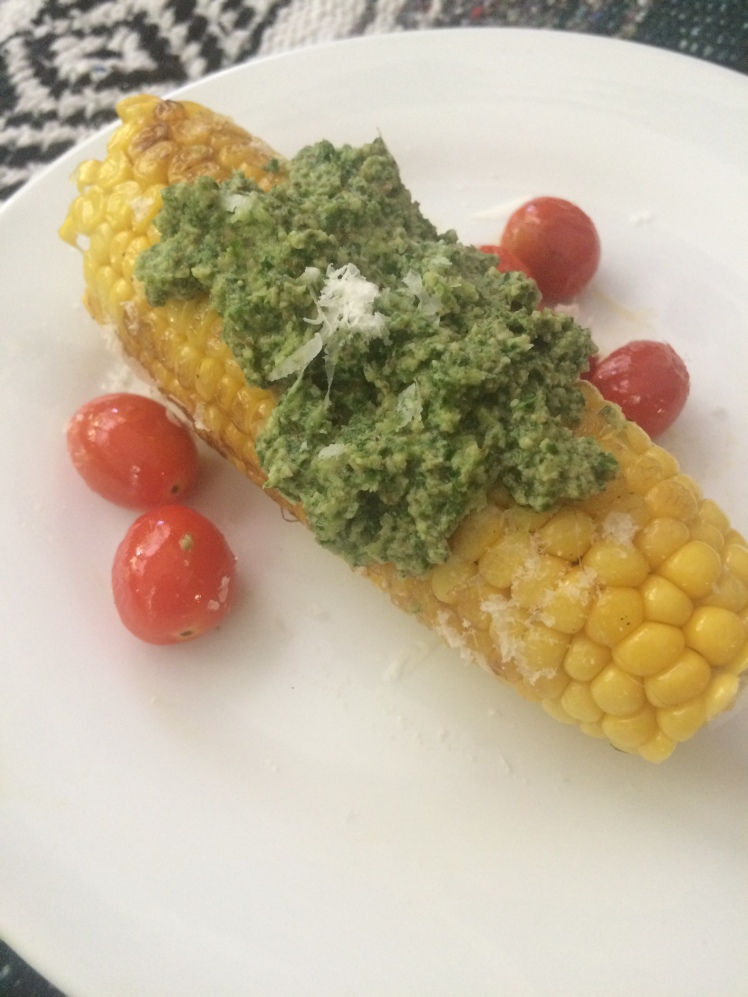 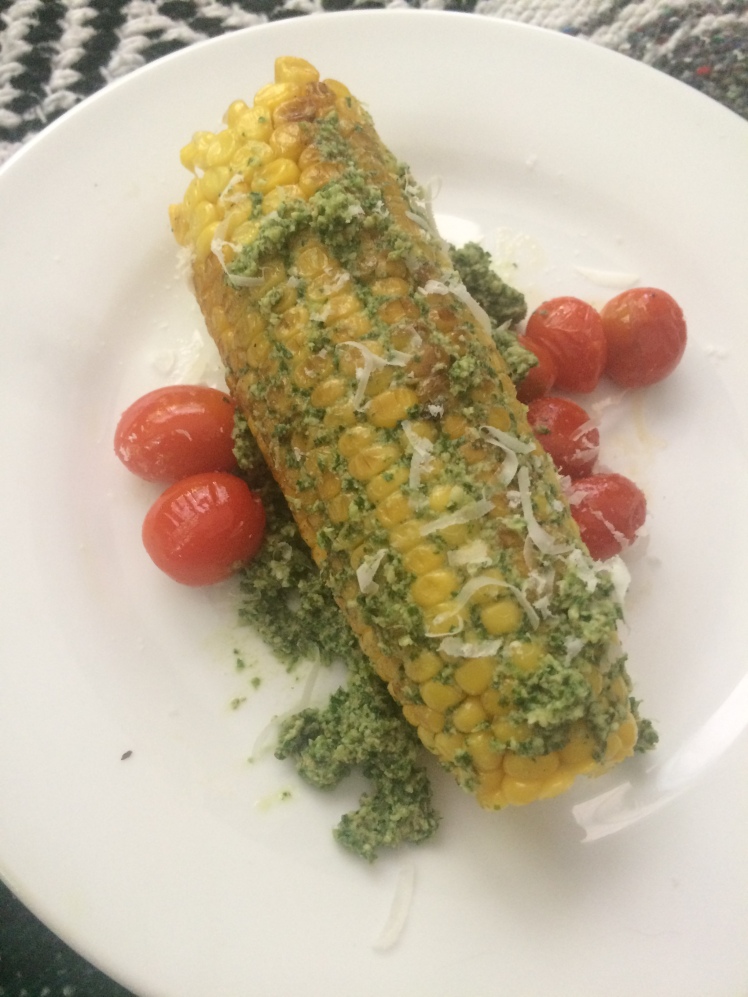 One thought on “Dandelion Greens Pesto”